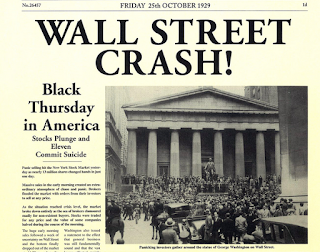 The summer of 1929 was uneventful for the most part, but the date October 24, 1929 would be remembered for years to come. That’s the day the Wall Street Stock Market crashed. Word spread quickly throughout West Baden Springs Hotel. Within hours, panicked guest were checking out. The mass exodus continued for four days until everyone was gone; the life had literally been drained from the hotel.

Hotel owner Ed Ballard hoped the crash would be short-lived but as it drug on into the 1930s, Ballard realized that it was the end of an era for his beloved hotel. In 1934, after numerous attempts to find a buyer for the business, he sold the $7 million grand dame for $1 to the Society of Jesus - the Jesuits. Thus began thirty years in the hotel’s history as a Jesuit seminary.

West Baden College became an affiliate of Loyola University in Chicago where priests, brothers and students were sent to train and teach. These Jesuits immediately removed or covered most of the hotel’s lavish furnishings and decorations to fit with their belief in simplicity. Anything that was considered too extravagant by this austere order was hidden from sight (but thankfully stored, and therefore preserved.) Even the regaled mineral springs were capped with concrete and turned into shrines for saints after tons of stone were dumped down into them.

During their thirty years there, the Jesuits established a small cemetery in which to bury those priests who died while serving here. The first burial was for Eduardus J. McDonald, Scholasticus, and took place on August 26, 1935.

The last burial was for Warner Richard Kerzmann, the first director of Northwood College, the institution that took over the structure from the Jesuits in 1966. Kerzmann was granted approval to be buried here in 1979 because of his deep ties to Northwood College.

In all, a total of 39 priests have been buried here over the years. In fact, Jesuits may still request to be buried in St. Ignatius Cemetery.


The seminary was closed in 1964 due to low enrollment and the high cost of keeping the building up. In 1966, Northwood College took over the structure, but the Jesuits retained ownership of St Ignatius Cemetery.

The cemetery is located to the west of West Baden Springs Hotel in West Baden, Indiana. It may be visited by climbing a shrub-lined pathway of stairs which lead to the top of a hill. There you will find a large white cross with 39 marked graves; this is St Ignatius Cemetery, known locally as the Jesuit’s Cemetery.