A Look Back at the 1971 Thiokol Chemical Plant Explosion

Woodbine, Georgia was selected as the place to build the Thiokol Chemical Corporation in the mid-sixties, thanks to its close proximity to Cape Canaveral where the space race was in full orbit. Situated on 7,400 acres, the company built and tested solid propellant rocker motors for NASA. The plant was comprised on 36 buildings that housed all types of fuels and chemicals produced here.

On Wednesday morning, February 3, 1971, one of those buildings known as the Woodbine Plant (Building M-132) exploded killing 29 and injuring close to 50 workers, most of them women. According to reports, the fire began in an area where ignition chemicals were added to other explosives including magnesium. The fire then spread to a storage area that contained 56,000 flares. The resulting blast leveled the building, killing 24. Officials were not sure of the immediate death toll due to victims being dismembered from the explosion, and bodies being blown from the building into a nearby forest.

Three more buildings were heavily damaged and more than 50 workers were injured, five so severely, they died within days from their injuries. Nearby buildings sustained scorched and buckled aluminum walls, and charred utility poles. Another seven buildings received minor damage from the blast. One survivor said it was “like an atomic bomb” had gone off. Heavy smoke and dangerous fumes lay over the plant as a dismal rain began to fall on the wreckage.

At the time of the tragedy, the plant had an order to produce 758,000 trip flares for the Army’s use in Vietnam. The materials were originally given a Class 7 designation – the highest ranking for hazardous chemicals and materials. But in 1967, the Army had downgraded the classification to a Class 2 – which designated a fire hazard. The Army reissued the Class 7 designation in the fall of 1970. It reached the Thiokol Plant on February 25 … 22 days after 29 people lost their lives in the devastating explosion. 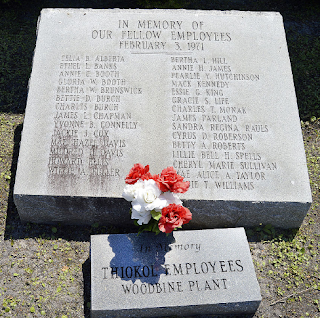 Today, children of survivors are working to develop the Thiokol Memorial and Museum to honor those killed and injured in the incident - most who were women. Thiokol was one of the few places in the late 60s and early 70s where a woman could get a full time job and be paid the same wages as a man. Due to the Army contract, the plant’s workforce at the time of the blast was close to 500 employees working round-the-clock to get the order filled.
Tomorrow, February 3, is the anniversary of the explosion. A memorial service will be held to honor those who died and were injured 47 years ago.
~ Joy
Posted by Joy Neighbors at 6:00 AM