Tombstone Tourists are all about history, heritage, and preservation. We want to save the stones, the cemeteries, and the stories for future generations. That’s why when I received a link to an article by Terre Haute Indiana Tribune Star staff writer David Kronke a couple of weeks ago, I immediately put out a call for any volunteer restoration groups willing to help “Save the Elk.”

According to the article, the Benevolent and Protective Order of Elks Lodge No. 86 in Terre Haute, Indiana, had planned to auction the bronze statue after publicly stating they couldn’t afford to refurbish it.

It is worth noting the Elks Lodge owns the plot of land where Elk members are buried and the statue stands. A cemetery plot is sold like any other piece of real estate; the buyer signs a deed for the land, tiny though it may be. The original deed goes to the purchaser, and a copy is filed in the courthouse and with the cemetery. Therefore, Highland Lawn Cemetery owned by the City of Terre Haute, does not own the statue and has no control over its sale or removal.

No sooner had I sent out pleas for assistance than questions began to surface. “Who had said the statue needed restoration?” “What type of refurbishing was needed?” “Had Elks Lodge No. 86 asked for or sought any assistance in refurbishing the statue?” One Facebook reader cut to the chase and called it a “money grab, pure and simple.” 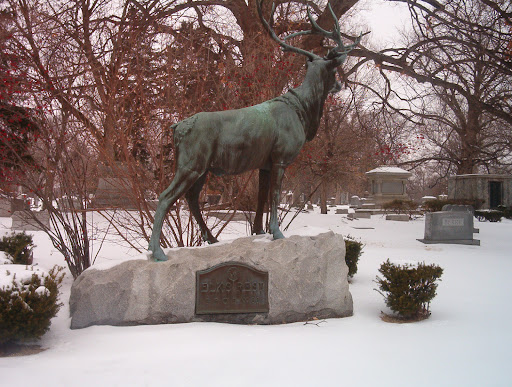 Locals felt the same way. Many said this wasn’t about the statue needing repairs; it’s about a fraternal club needing money due to suffering financial problems …again.

The community rose in protest when Maple Avenue Auction released a notice of the sale. The Elks leadership set the minimum bid at $30,000, and the buyer must also pay all moving and repair fees.

According to Tommy Kleckner, director of the Western Regional Office of Indiana Landmarks, no matter how much the Elks would receive from selling the statue, it wouldn’t match “its intrinsic historical value.”

When Terre Haute resident Dot Lewis heard about the pending auction, she decided to do something about it. Lewis has formed the Facebook group, Save the Elk (Elks Rest) @ Highland Lawn Cemetery, Terre Haute, Indiana.

Lewis hopes to draw attention to the possible plight of the elk and create a public forum to protest its sale and removal. When I queried her about the potential auction, she explained that the statement made by the Elks that they need to sell the statue due to refurbishment “is simply not true.” The decision to sell the elk was a “private decision…made by the leadership of local Elks Lodge No.86 without public or membership notification or discussion.”

According to Lewis, “It is a justification for their unethical tactics and greed. They are selling it because they want money for their lodge.” Lewis went on to say that neither “the Elks nor us (Save the Elk) need resources for refurbishment.”

A cemetery sexton I spoke with said that a bronze statue might need the joints rewelded due to metal fatigue, but historians would not consider removing the century-old patina.

The 14-point elk has overseen the graves of nearly two-dozen Terre Haute Elk members for almost a century. Sculptor Eli Harvey designed the elk statue in 1904. Harvey spent weeks inside a shed to gather the correct dimensions, and attitude, of an elk stag in rut. Some believe that Harvey could “touch the soul” of the animal. His bronze elk sculptures represent the emblem of the Benevolent and Protective Order of Elks, and it was his most popular work. The statues, cast in 1905, were available in statuette and monumental versions. The elk was originally known as the “Bull Elk.” The monumental Highland Lawn Cemetery statue is known locally as “Elks Rest.” An attached plaque reads: “Elks Rest, BPOB No. 86,” and a clock face depicts the time as 11:55. 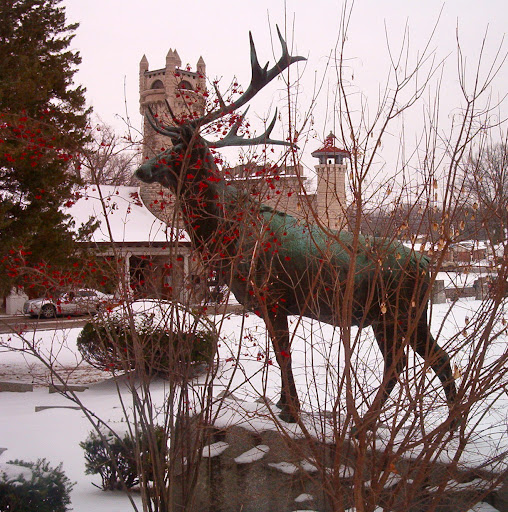 Located at the entrance gates, the elk is the first destination on the cemetery
walking tour and listed on the Waymarking site in “Smithsonian Art Inventory Sculptures” pertaining only to outdoor public sculptures.

Lodge No. 86 purchased the statue in 1927 and dedicated it at the fraternal cemetery plot the following year.

Elks No. 86 Has Sold Other Historic Artifacts

Lodge 86 is the same group that sold the historic Revolutionary-era cannons displayed at Fort Harrison. The site was once the location of the Elks Lodge Country Club and Golf Course.

Families are appalled that Benevolent and Protective Order of Elks No. 86 would choose to sell off this symbolic statue that oversees their dead. This considered action doesn’t ring true to the Elks mission statement:

“… the Benevolent and Protective Order of Elks of the United States of America will serve the people and communities through *benevolent programs, demonstrating that Elks Care and Elks Share.”

That depends on whom you’re speaking with. Several attorneys have voiced the possibility that legal action could be considered.

According to an Indiana law, it is illegal in Indiana to sell anything placed on or in a grave.

Sec. 4. A person may not buy or sell any of the following that have been removed from a cemetery:

The statue would be considered a commutative item, which an attorney explained, “The Elks Lodge can get rid of it, but just not sell it.”

What Can Be Done?

• A lawsuit could be brought by concerned citizens against the Elks Lodge No. 86.

• The City of Terre Haute, the State of Indiana, or a group of concerned citizens, or historians, could consider purchasing the statue and allowing it to remain permanently in Highland Lawn Cemetery.

• The city could also apply for an Indiana Historical Marker for the elk possibly in time to stop a sale.

• You could consider filing a complaint with the Indiana Attorney General.

• For other suggestions, visit Save the Elk on Facebook.

And we must consider, what precedent does this potential action set for other historic markers and monuments around the country?

As Dot Lewis put it so succinctly, “What kind of fraternal society…would be so disrespectful to its deceased members (as) to sell off what is symbolically a grave marker?”

For now, the auction is on hold. 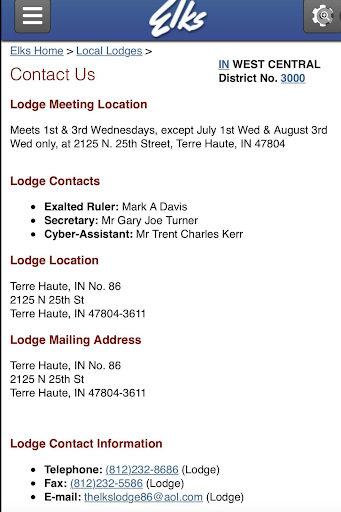 Send an email to the Indiana Elks Association.

Contact the National Benevolent and Protective Order of Elks.

Wishing you and yours a safe and happy New Year!

Posted by Joy Neighbors at 4:49 PM