Ledger stones have been used for centuries to mark graves. Many times the stone was laid in the floor of the cathedral or church to mark the burial spot of an important person. An inscription was usually chiseled into the top, which was adorned with intricate designs or a family coat of arms. 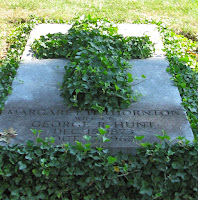 Ledger stones were made of black marble, white marble or Sussex marble, a fossilized limestone type of rock. Alabaster was popular for cathedral floors as was slate. Ledger stones were susceptible to wear when placed flush with a church floor but this designation indicated someone who had found favor within the church. Today, bronze and marble are popular for ledger tops.

Ledger gravestones lie flat on the ground. Full ledger stones cover the entire top of the grave. Ledger stones were also fitted on top of box or chest graves, and table or pedestal tombs.

Box and Chest Tombs
Box and chest tombs were popular during the early and middle 1800s. These rectangular boxes were usually made of local materials, usually stone or brick. Box tombs were smaller in size than chest tombs. In England, a box tomb designated someone of a poorer background. In the U.S., the size of the tomb did not have a hidden meaning. If the chest tomb was placed on a large flat base, it was known as an alter tomb. The body was not placed in either the box or chest but was buried underneath the memorial. The ledger stone could be heavily designed or left unadorned.

Pedestal and Table Tombs
A pedestal tomb is taller than a chest tomb and can come in several shapes including square, round, oval and three cornered.
A table tomb has a raised ledger top, which looks like a tabletop, and is supported by four columns or legs that rest on a landing stone.

All of these grave markers were popular during the first part of the Nineteenth century. Today, ledger stones are once again in demand as cemeteries encourage monuments to be flush to the ground making lawn maintenance easier.
~ Joy