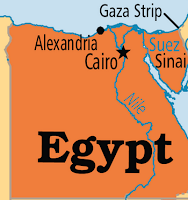 An ancient funerary boat was discovered two years ago in Egypt, near Cairo, but the find was just announced Monday by Egypt’s Antiquities Minister.

In October 2013, an excavation team unearthed the ship and also discovered human remains at the Abusir site where fourteen pyramids are located.


Czech archaeologists were clearing a mastaba, or ancient tomb, at the Abusir South Cemetery, when they discovered human remains believed to be more than 4,500 years old. Officials believe the remains belonged to a distinguished resident since the Abusir site was where Egyptian kings of the Fifth Dynasty were interred.

Archaeologists were continuing their excavation when they unearthed parts of a 59-foot barque-type boat- a highly unusual find due to the boat’s size. The ship was uncovered near the tomb’s southern wall and had been lying on rocks, covered by the desert sands for thousands of years. According to the antiquities ministry statement, the boat indicates the "extraordinary social position of the owner of the tomb.”

One Czech archaeologist said “boats of such a size and construction were reserved solely for top members of the society, who usually belonged to the royal family.”

If not of the royal family, this person held an extraordinarily high social position, someone who had solid connections with the reigning pharaoh, archaeologists said.

According to the Egyptian Ministry, pottery discovered in the boat is much older than the Fifth Dynasty, possibly going back to the Third or Fourth Dynasty. It is believed that the boat is also of that era.

According to the Egyptian Ministry’s statement, "The wooden planks were joined by wooden pegs that are still visible in their original position. Extraordinarily, the desert sand has preserved the plant fiber battens which covered the planking seams."

Because the boat is still mostly intact, researchers expect to learn more about how Ancient Egyptians built their watercraft and how the ships were used in funerary services.

Scholars believe that the funerary boats were barques; ships having three or more masts, used to transport the dead to the afterlife. Pharaohs and members of the royal families were entombed with barques built especially for their final journey. Ancient Egyptians believed that the deities traveled through the sky in barques. (The Milky Way was thought to be a waterway, like the Nile River.)

The last such Egyptian ship was discovered in 1954. One of the oldest and largest of the ancient boats was unearthed at the foot of the Great Pyramid of Giza.  The Khufu boat, so called because it was built for Khunum-Khufu, the second pharaoh of the Fourth Dynasty, was a 143 feet long funerary boat crafted from cedar. The ship is being reconstructed at the Giza Solar Boat Museum

Digging at the Abusir Pyramids began in 2009. The site is located south of the Pyramids of Giza. The excavation will continue until sometime in the spring.