If you've spent much time wandering cemeteries, you’ve come across those realistic, but sometimes ornate, tree stone grave markers.  While intriguing, there are always questions concerning them: How did they come about?  What do they represent?  And is there a difference between the organizations MWA and WOW?  Read on…….
Joseph Cullen Root founded Modern Woodmen of America http://www.modern-woodmen.org/ in Lyons, Iowa in 1883.  Root was a member of several fraternal organizations and wanted to create one that would provide insurance benefits to a family when the husband/father died.   Most fraternal organizations at the time were tied to religious orders.  But Root imagined one without religious ties, a society that would “bind in one association, the Jew and the Gentile, the Catholic and the Protestant, the Agnostic and the Atheist.”
Root decided on the woodmen name after hearing a minister describe his congregation as ‘trees in God’s forest.” When first founded, modern woodmen were white men between the ages of 18 and 45, from rural Midwestern states.  The home office of MWA began in Fulton, Illinois in 1884 and moved to Rock Island, Illinois in 1897, where it remains today.
In 1888, the ladies auxiliary of the MWA, the Royal Neighbors of America (RNA), was started.  Their symbol was a five-petal flower.
In 1890, after a heated dispute, Root left the Modern Woodmen of America to found another fraternal insurance benefit society, Woodmen of the World (WOW or WOTW) in Omaha, Nebraska.
The Modern Woodmen of America (MWA) became well known for their drill teams.  Known as the Foresters, over 10,000 units, made up of over 160,000 men performed nationally from 1893 through the late 1930’s.   The Foresters Drill Teams performed at parades and festivals across the country, and even entertained at the White House for President Hoover.
MWA members were also known for their community assistance.  The organization built a 1,000-acre, $1.5 million dollar tuberculosis sanatorium in Colorado Springs, Colorado in 1909, one of the largest in the country.  It was named as one of the most outstanding TB institutions by the American College of Surgeons. Over 12, 000 MWA members were treated there for free.   The recovery rate at the institute was an amazing 70%.  The facility closed in 1947 when drug treatments for tuberculosis showed promise and deaths began to decline. In 1910 MWA membership hit the one million mark.  By 1929 women and children were also being insured by the group.
Founder Joseph Root wrote a funeral ceremony that was to be performed when a member died.  These ceremonies were held during the late 19th and early 20th centuries.  Today, memorial services are held during the month of June at each chapter to remember their deceased members.
MWA offered it's members the opportunity to purchase grave markers for deceased associates until the mid-1970’s.  Cemeteries around the country also have tree stone monuments, engraved with the MWA initials and symbols.  MWA did not supply these grave markers or provide any monetary assistance for their purchase for members.  Woodmen of the World did provide assistance for tree stone grave monuments for their members.

Tree stone markers were also available for purchase from the Sears and Roebuck catalogue and the Montgomery Ward catalogue during the early twentieth century.  A tree stone marker does not necessarily mean that person was a member of MWA or WOW.  Only if the organizations' initials or symbols are located on the stone does it indicate that the deceased was a member of one of these organizations. 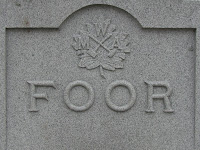 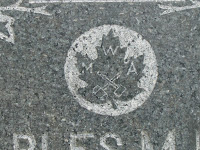 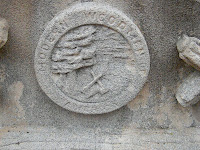 Today, the Modern Woodmen of American is the nation’s third largest fraternal benefit society, with close to 750-million members.  The group has assets of over $9 billion.  Close to 2,200 chapters or ‘camps’, exist in the U.S., mainly in the Midwest and the South.  MWA meetings are held throughout the year, along with parades, and community events.  The MWA also supports youth activities and organizations throughout the country.  In 2008, Modern Woodmen of America celebrated their 125th Anniversary.
Friday, we’ll explore Father’s Day in the cemetery.
Next Tuesday we’ll take a look at the second fraternal benefit society that Joseph Root founded, Woodmen of the World. This is the organization known for the tree stone grave markers.
~ Joy
Posted by Joy Neighbors at 7:00 AM