Earth Day is Sunday April 22nd, so this seems the perfect time to take a look at ‘going’ green with funerals and burials.

We live ‘green.’  Why not die green?  The term “green” refers to a practice that is not harmful to the environment – something that is natural. For many, a green funeral and/or burial are ethical choices, a simple decision to go back to nature.

Natural burials date back thousands of years.  This is how we’ve buried our dead for centuries. But natural burial fell out of favor during the Civil War. That’s when embalming was utilized in order to transport bodies back home to be buried.  By the end of the nineteenth century natural burial had dropped off, and by the mid twentieth century funeral homes were playing a major part in the private ritual of death and burial.

Contrary to popular thought, you do not have to have the deceased embalmed.  Embalming is never required for the first 24 after death. Also, you have a set amount of time to bury a body before embalming may be required according to your state law. According to Funeral Consumers Alliance, http://www.funerals.org/  “There is no public health purpose served by embalming.” However, the Federal Trade Commission does allow funeral homes to require embalming for public viewing.

A green funeral can be held outside in a natural setting, at a loved one’s home, or at a special place of remembrance. A funeral home is not required.  With a green or natural funeral, the body is not embalmed and no toxins are used to preserve it.

Each year, 22,500 cemeteries across the United States bury approximately:
30 million board feet of  hardwood (caskets)

A green burial is one that is done with a biodegradable container, which is nontoxic to the environment such as a cardboard or wicker coffin.  Wicker coffins may be woven from willow, seagrass or bamboo and pine.

Shrouds are also an option and are still used in many cultures and religions including Islam, Judaism, Hinduism and Christianity.  A shroud is a long piece of cloth, usually made of cotton or linen in which the body is wrapped. The shroud is then placed directly into the grave without a casket.

Green cemeteries are just that – natural and green.  Pesticides, herbicides and some fertilizers are not allowed.  They do not allow metal coffins, concrete vaults or headstones.  Instead the body is put in a degradable coffin or shroud and placed in the grave with a flat rock, plant or tree serving as the grave marker. Some green cemeteries are using GPS coordinates to locate graves.

Natural cemeteries also dig the graves by hand, and the body is laid to rest without equipment.  Landscaping is made up of plants and trees native to the area, with the cemetery resembling a woodland.  England has over 200 green cemeteries while in the U.S., a the idea is just catching on.  But the trend is growing. Many traditional cemeteries are opening sections that are only for green burials. The Green Burial Council http://www.greenburialcouncil.org has established the United State’s first certifiable standards for funeral providers, cremation facilities and cemeteries regarding green burial.  To locate a natural burial site, visit http://naturalburial.coop/USA/

Green funerals and burials are much less expensive than traditional ones.  Burial in a green cemetery can run from $1,000 to $5,000, including the plot, opening and closing of the grave, and a one-time charge for perpetual care. The majority of the cost for green burial goes for maintenance, landscaping and conservation of the property.

There are other ways to go green in death.  Cremation is another option.  Remains may be placed in a biodegradable urn and  buried, dropped over water, or scattered. If you decide to urn the remains, you can still go green with an urn crafted from handmade paper, rock salt or bamboo.

Water burial is another option for a green burial.  This can entail a full body sea burial where the unembalmed body is wrapped in a shroud before being lowered into the water.  Or you could choose cremation and have the ashes scattered over a body of water, or put in a water urn and dropped into it.  You might rather choose to have your cremains become part of a man-made (literally) reef.  http://www.EternalReefs.com offers several options including having the manmade reef added to a living coral reef.

You can consider being buried on your own plot of land.  Home burial is an option and is allowed in most parts of the United States.  Check your state’s laws on acreage requirements. Home funerals are also allowed but may require the assistance of a home funeral practitioner or a licensed funeral home director.  Again, review the laws for your state. 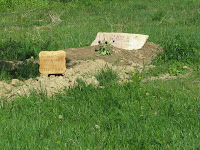 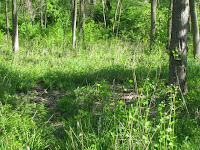 According to AARP – 21% of people over the age of 50 would prefer an eco –friendly, ‘green’ end of life ritual as opposed to a traditional funeral.  Maybe its time we ‘got back to nature’ and started respecting not only the planet, but ourselves as well.  Green burials follow the natural cycle of life, returning the body back to the earth in the least obtrusive manner.