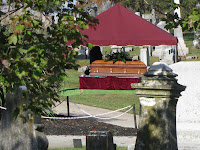 Today, I went to a cemetery - for the usual reason people go– bidding farewell to someone.  It has been years since I’ve actually been to one without a camera, and I felt a bit odd to be a part of the event, and not a detached watcher across the way. 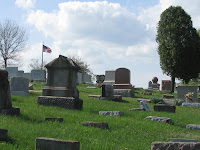 On a windy hill in a tiny country cemetery, I stood with others under the bright April sunshine as another soul was remembered.

And I wondered how many people had stood on that tiny hill, remembering someone dear, while clergy and friends try to console but can only offer a partial understanding of the grief, and an allocation of hope. 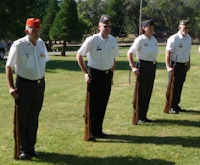 A Korean veteran, the deceased was given Military Funeral Honors by local American Legion members.  As the detail leader presented the folded U.S. flag to his wife, he explained what each color stood for; “The blue in the flag represents the sea and sky and stands for justice.  The red in the flag represents valor and the blood shed by American heros who sacrified for our freedom.  The white stripes in the flag symbolize our liberty.”  I have seen this presentation of the flag many times on television, but have never attended a veteran’s funeral and heard what words may be said to the family. 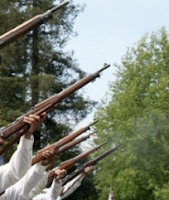 The ‘three volley of musketry’ salute to a fallen comrade, an American military custom, was sharp in the morning air – three shots fired in quick succession.  Then the call “Bugler” came, and I knew I wouldn’t make it through with dry eyes.  The haunting sound of Taps was fitting and filled the air with long sweet notes, played by one man, his weathered face slightly raised toward the sun… 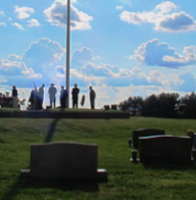 Then came the command to ‘Order arms’ and the seven older veterans soldiered their rifles on their shoulders and began their slow walk back across the hill, and into their normal day.

As various scriptures were read, I remembered the first time I had met Bob.  He and his wife, MaryAnn, close friends of one of my dearest friends, Terry, had attended a play we were in.  It was my first venture into theatre and I had landed a lead against a seasoned actress.

As we stood in front of the stage after the performance, meeting and greeting those who had attended, Bob had shaken my hand and said, “You two have a sort of magic up on that stage – You play well off of each other – You can make people laugh.  What a wonderful gift.”

Terry and I have gone on to star opposite each other in numerous shows, and each time Bob and MaryAnn were in attendance, until his health became too bad for them to continue.

But every time, before I step onto that stage in front of an audience, I think of those words… – "You can make people laugh. What a wonderful gift."   Indeed, it is. And what a wonderful, touching compliment for an actor to hear. 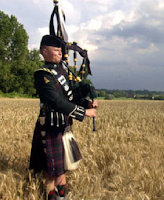 As the service drew to a close, a lone bagpiper stood on the crest of the hill, stately in his jacket and kilt.  The plume on his hat swayed in the breeze.  As the final prayer died away, ever so gently, he began to play - Amazing Grace.

With each sonorous note, it seemed as if he were drawing the sound up from the earth, releasing it with the bellows he controlled under his arm. I turned toward him, the only one in the small gathering, to watch. And in that moment, I understood just how important a cemetery really is – It not just as a place to bury our dead, to memorialize them, to go and remember in; it is also a place where we separate and say goodbye, where bonds are broken, where we must let go and release them, in order to grasp the parting of ways.

Lost in the moment, I realized the music had changed; the sound was starting to recede.  When I looked up, the bagpiper was walking away, slowly, toward the sun, head held high, kilt and red plume blowing in the prairie wind. And in that moment, I could picture Bob walking beside him, following the music to see where it would lead. 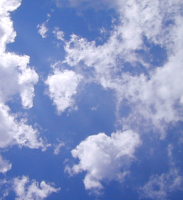 The bagpiper crested the hill and was lost from view – but the final notes hung on the air for a moment, before being whipped skyward in a mixture of finality, and tumultuous expectation….