Known as the “Father of the Skyscraper”,  Louis Sullivan was one of the most influential architects in modern history. His designs were considered some of the best in American architecture.


Louis Henry Sullivan was born on September 3, 1856 to Patrick and Andrienne (List) Sullivan in Boston.  He was raised on his grandparent’s farm in South Reading, Massachusetts - but Louis had an affinity for the city.  As a young teen, Sullivan was fascinated with buildings, how they were constructed, what materials were used, and why.

In 1871, Sullivan entered Massachusetts Institute of Technology (MIT) at the age of 16. He studied there for one year before moving to Philadelphia and landing a one-year job with architect Frank Furness.

Sullivan moved to Chicago in 1873 and became part of the design work force reconstructing the damaged city after the Great Chicago Fire of 1871.

In 1880, architect Dankmar Adler hired Sullivan as a draftsman and designer.  Three years later Adler made him a partner in the firm.  Adler and Sullivan began their partnership designing theatres.

Adler was the partner who sought out and secured the large commissions; Sullivan was the architect who could design and create the visual unity necessary in tall buildings.

But the commission that made their company famous was the Auditorium Building, built from 1886 to 1890.  Not only did it house a 4,200 seat theatre, but also a hotel, and offices located in the 17-story tower.  The building was so amazing, it helped the city of Chicago land the Columbian Exposition – the Chicago’s World Fair of 1893.

Adler and Sullivan went on to design the Wainwright Building in St Louis, the Chicago Stock Exchange Building, the Guaranty Building, now known as the Prudential Building in Buffalo, New York, and the Carson Pirie Scott Department Store on State Street in Chicago – all within a period of five years.

Sullivan is known for coining the phrase “form follows function.” This means that the form (shape) of the building should be based on what the intended function (purpose) is. Sullivan first used the phrase in 1896 in his article for Lippincott’s Magazine entitled “The Tall Office Building Artistically Considered.”  It became the mantra of 20th Century modern architecture and industrial design.

Sullivan was the first architect to use steel frames in his skyscrapers. His American style of architecture simplified the look of modern buildings and created new techniques to lead the eye, and the population, upward. Sullivan believed that the use of steel in building construction was safe and economical. And with the continued growth of cities, vertical was the only way to expand buildings. The newly evolved high-speed elevators made such an idea a possibility.

Sullivan understood the three parts that were fundamental to classical design - base, shaft, and capital.  His steel skyscrapers were divided into these three parts starting with a plain base that had plenty of large windows for the ground level shops.  Banks, stores, and other businesses that catered to foot traffic would occupy these street-level stores.

The second design area (shaft) contained the offices. It was emphasized by vertical bands of masonry going up the corners of the building to emphasize its height. These tiers of offices could be built one upon another, with the individual offices being, as Sullivan described, "similar to a cell in a honeycomb."

The final area was at the roofline where round windows were located.  This attic area was filled with the mechanics, pipes, and cables that came up through the building from the basement.

While he felt that the practical construction of a building should be more important than the design elements, Sullivan did not object to ornamentation on buildings.  He was known to place Art Nouveau and Celtic Revival details fashioned from iron, stone, and terra cotta on his buildings.  The Art Nouveau vines located at the ground-floor level of building entrances became his signature mark.

Frank Lloyd Wright was Sullivan’s chief draftsman for six years and was intensely influenced by him.  It was Wright who took the phrase “form follows function” and adopted it as his architectural motto.  Wright used it as the backbone for his famous Prairie School architecture of the early 1900’s.

In 1894, Alder and Sullivan dissolved their partnership.  After the Panic of 1893 when investors made a run on the gold in the U.S. Treasury, expansion and economic growth slowed down. Over 600 banks closed and 1,500 businesses failed during that time.  The U.S. economy would take four years to recover.

Sullivan received a few more large commissions, but without Adler seeking the business, the demand for Sullivan's designs began to disappear.   Slowly, he went into an emotional and physical decline.  Never again would Sullivan be commissioned to design a skyscraper.  Instead, he worked off and on, designing minor building in small Midwestern towns, and writing books. 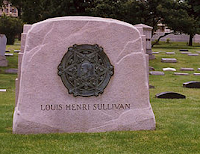 On April 14, 1924, Louis Sullivan died alone and broke in a Chicago hotel room.  When former student, Frank Lloyd Wright heard this, he paid for Sullivan’s funeral.   Sullivan was buried at Graceland Cemetery in Chicago; near the modern mausoleums he had designed for Chicago’s wealthy families.  A small stone was placed at Sullivan’s grave, and later, a monument was erected nearby.


Sullivan’s architectural goal was to create, in his words, “… architecture that will soon become a fine art in the true, the best sense of the word, an art that will live because it will be of the people, for the people, and by the people.”