It had been a dark rain-swept evening in Whitechapel when just before 1:00 a.m. on September 30, 1888 the alarm was raised; another prostitute had been found with her throat cut. After three weeks of an uneasy quiet, Jack the Ripper had struck again. Forty-five year old Elizabeth Stride was considered, by police, to be his third victim.
Elisabeth Gustafsdotter was born on November 27, 1843 in Torslanda, Sweden, the daughter of Swedish parents. She was shown to be working as a domestic for Lars Frederick Olofsson in 1860, and moved to the Gothenburg district in 1862. By 1865, Elizabeth was registered with the police as a prostitute and had given birth to a stillborn girl. In 1866, she moved to London for work.


Elizabeth was said to be an attractive woman with dark brown hair, grey eyes, and an angular face. And at five-foot-five, she was considered to be a tall woman. On March 7, 1869 she married John Thomas Stride. Stride was a ship’s carpenter, well over a decade older than her. Together, they operated a coffee room in East London for six years.

By March 1877, Elizabeth Stride, nicknamed “Long Liz”, was living at the Poplar Workhouse. She and John made attempts at reconciliation but by the end of 1881 they had permanently separated. She was known to embellish her stories concerning her husband and her former life with him. John died of heart disease in October 1884.

Elizabeth received some charitable aid from the Church of Sweden and spent most of her life at a common lodging house in Whitechapel. In 1885 she moved in with a local dockworker, Michael Kidney, on Devonshire Street.

Elizabeth earned some money by cleaning houses and sewing. People who knew her said she had a good temperament but could become unruly when drunk.

Stride and Kidney continued to live together, on and off. In the spring of 1887, Elizabeth filed an assault charge against him but never showed up for  court. She and Kidney were again on the outs in the autumn of 1888, and she moved out just a few days before her death. She found lodging at a common house at 32 Flower and Dean Streets in Spittalfields, her last address.

Elizabeth spent most of the evening of Saturday the 29th walking the streets and talking with men. She was dressed all in black with a kerchief tied around her neck. Police Constable William Smith last saw her at 12:35 a.m., talking with a man across from the International Working Men’s Educational Club, a Jewish socialist club on Berner Street. PC Smith later reported that the man had been carrying a package wrapped in newspaper about 18 inches long.

It was just before 1:00 a.m. when Louis Diemschultz, a peddler and the club’s steward, discovered Stride’s body in the darkness of Dutfield’s Yard. Dr. Frederick W. Blackwell was called to the scene and kept order until Dr. George Bagster Phillips arrived. Phillips had also been called to the scene of Annie Chapman’s murder.

Phillips reported that Elizabeth was found lying on her side with her face turned toward the wall. According to Phillips, “The legs were drawn up with the feet close to the wall. The body and face were warm and the hand cold. The legs were quite warm… The throat was deeply gashed.”

But the body had not been mutilated. Police began to wonder if this was the same murderer who had killed the other Whitechapel prostitutes. Did Diemschultz startle the Ripper and he fled before mutilating the body, or was this a different murderer?

The inquest into Stride’s death began on Monday, October 1 at the Vestry Hall, conducted by coroner Wynne Edwin Baxter, who had also presided over Annie Chapman's and Polly Nichol’s inquests.

It was suggested that the murderer grabbed the scarf Stride was wearing around her neck, and pulled her backward with it before cutting her throat. The fact that she was still holding a packet of cachous (breathe mints) showed that she had not had time to defend herself and had not suspected anything was amiss. 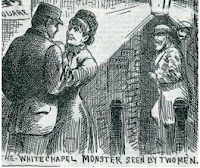 Testimonies were conflicting and descriptions of the man she was last seen with differed from witness to witness with each telling. Investigators decided that this was another victim of the Whitechapel murderer because of the many similarities to the other two murderers, which had occurred just a few weeks earlier.

Elizabeth Stride was buried on Saturday October 6, 1888 in the East London Cemetery in grave 15509, square 37. The local parish paid for her burial.

Michael Kidney reportedly appeared drunk at the Leman Street police station on the day after the murder, claiming police incompetence. Kidney told police that if he had been a policeman on duty that night in the area where Liz was murdered, he would have shot himself (for incompetence.)  Kidney was considered a suspect in Stride’s murder but was later eliminated from the inquiry.

Catherine Eddowes had spent part of her rainy Saturday night in custody at the Bishopsgate Police Station. She had been picked up around 8:30 p.m. drunk and lying in the middle of Aldgate High Street. Eddowes remained at the station until around 1:00 a.m. when she was sober enough to walk out. She was last seen alive at 1:35 a.m.

Catherine “Kate” Eddowes was born on April 14, 1842 to George Eddowes, a tinplate worker and his wife, Catherine, in Graisley Green, Wolverhampton, England. She was their eleventh child. Kate’s parents moved to London the next year and she grew up in the city.

In the early 1860’s, Kate left home and moved in with an ex-soldier, Thomas Conway. They had three children, and worked together selling cheap books and ballads. By 1881, she had left Conway and was living at Cooney’s Lodging House on Flower and Dean Streets with John Kelly.

Kate was known as a friendly woman, always singing, except when she had been drinking, and then she was known to have a raging temper. At five feet tall, with auburn hair and hazel eyes, she was considered to be a handsome woman.

Her former partner, Thomas Conway, and her children kept their addresses secret from her to discourage her from seeking them out for money or assistance.

During the summer of 1888, Kate and John Kelly went hop-picking in Kent. They returned to London when the harvest was over but their money was soon spent. That Saturday morning, the 29th, Kate and Kelly split the last of their funds. Eddowes decided to go see her daughter, Annie Phillips in Bermondsey, and plead for money. Kate did not know that her daughter had moved, yet again, leaving no forwarding address.

Kelly pawned his boots that rainy evening and bought a bed at the lodging house. The lodging keeper reported that he did not leave again that night.

Kate was not reportedly seen again until that evening when she imitated a fire engine to the delight of the crowd gathered on Aldgate High Street. She then passed out in the street and a city police constable took her to the station to sober up.  She was heard singing to herself around 12:15 a.m. and released about 1 a.m.

Three men saw Kate leave the Imperial Club at 1:35 a.m. She stopped and talked with a man at the corner of Duke Street and Church Passage. One of the men, Joseph Lawende, describes the man with Eddowes in detail, stating that he was possibly a sailor.

It was less than 15 minutes later that Catherine Eddowes body was discovered in Miter Square by Police Constable Edward Watkins. Kate had been severely mutilated, and her throat had been cut.

London police surgeon, Dr. Fredrick Gordon Brown was called to the murder scene and arrived around 2 a.m. Brown reported that “The body was on its back, the head turned to left shoulder… The intestines were drawn out to a large extent and placed over the right shoulder… Body was quite warm. No death stiffening had taken place. She must have been dead most likely within the half hour.”

Police also found a couple of clues this time. At about 3 a.m., a piece of the apron Eddowes had been wearing was discovered lying in the doorway to rooms at Wentworth Model Dwellings on Goulston Street in Whitechapel. The apron piece had blood and feces on it and it appeared that something had been wiped with it. 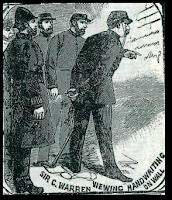 Police also discovered written on the wall above the apron piece was graffiti that read, “The Juwes are the men that Will not be Blamed for nothing". There was some debate as to the exact wording since Metropolitan Police Commissioner Sir Charles Warren had the chalked words quickly washed away, afraid they would incite an anti-Jewish riot.

Eddowes body was taken to the City Mortuary. Brown continued his postmortem there and reported that her face had been mutilated, and a piece of ear and the tip of her nose cut loose. Brown later testified that the cause of death was a hemorrhage from the left common carotid with death occurring immediately.

The inquiry into Catherin Eddowes death opened on October 4 by City Coroner Samuel F. Langham. According to Dr. Brown’s report at the inquiry, “…the left kidney carefully taken out and removed… “I believe the perpetrator of the act must have had considerable knowledge of the position of the organs in the abdominal cavity and the way of removing them… I think the perpetrator of this act had sufficient time ... It would take at least five minutes. ... I believe it was the act of one person.”

On Monday, October 1 police received a post card that referred to “Saucy Jack” and claimed responsibility for Stride and Eddows murders. The postcard read:

“I was not codding dear old Boss when I gave you the tip, you'll hear about Saucy Jacky's work tomorrow double event this time number one squealed a bit couldn't finish straight off had not the time to get ears for police. thanks for keeping last letter back till I got to work again.”

But upon later consideration, authorities and many Ripper historians believe that the postcard was actually the work of a local journalist, trying to stir up the police and the public, making for good headlines.


Catherine Eddowes was buried on Monday October 8, 1888. It seemed that all of Whitechapel turned out to walk Kate to the cemetery. Thousands lined the streets as the funeral procession passed. Hundreds more gathered at the burial site along with four of Kate’s sisters, two nieces and John Kelly.

Catherine Eddowes was buried in an elm coffin in an unmarked grave at the City of London Cemetery in Manor Park Cemetery. Her grave number was 49336, square 318. Kate’s burial was paid for by a Mr. G.C. Hawkes, a vestryman from St. Luke’s. In 1996, the City Cemetery placed a plaque in remembrance of her.