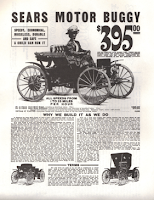 Although we take them for granted, autos have only played a part in our transportation for the past 125 years. And, as with anything new, there were plenty of “firsts” where the motorized wagon was concerned.

In fact, it was 114 years ago today that the first known person was killed in a motorized vehicle accident in North America.

It was around 9 p.m. on September 13, 1899, when 62-year-old Henry Hale Bliss, a Manhattan real estate dealer, stepped from a streetcar at West 74th Street and Central Park West in New York, to stand in front of the San Remo Hotel.  Bliss turned to offer his assistance to a female passenger, a Miss Lee, who was also getting off the streetcar, when an electric-powered taxicab struck him.

According to reports, Bliss was knocked to the ground by the impact and the taxi ran over his head and chest. Roosevelt Hospital surgeon, Dr. Marney, told officials that Bliss had been injured so badly he could not be expected to live. Bliss died of his injuries at Roosevelt Hospital the next morning around 6:25.

The driver of the oncoming cab, Arthur Smith was arrested and charged with manslaughter. Smith said that a large truck was blocking the right lane, “making it necessary for him to run his vehicle close to the car.” Smith was later acquitted on grounds that the accident was not intentional.

The passenger in Smith’s cab at the time of the accident was Dr. David Orr Edison, son of former New York City Mayor Franklin Edison. Edison was returning from a call on a patient in Harlem at the time of the accident. He immediately sent for an ambulance after examining Bliss and proceeded to do what he could to keep him alive until help arrived.

Cabbies and motormen referred to the area where Bliss was killed as the “dangerous stretch” because so many accidents had occurred there during the preceding summer.

Henry Hale Bliss was buried at Cedar Grove Cemetery in Flushing, New York. There is no stone to mark his grave today.

One hundred years later, on September 13, 1999, a plaque to commemorate the event was placed at the original scene of the accident. The plaque reads:

Here at West 74th Street and Central Park West, Henry H. Bliss dismounted from a streetcar and was struck and knocked unconscious by an automobile on the evening of September 13, 1899. When Mr. Bliss, a New York real estate man, died the next morning from his injuries, he became the first recorded motor vehicle fatality in the Western Hemisphere. This sign was erected to remember Mr. Bliss on the centennial of his untimely death and to promote safety on our streets and highways.

There were actually two other vehicle deaths recorded in the world before Bliss. On August 31, 1869, 42-year-old Irish scientist Mary Ward was thrown from an experimental steam-powered car on a bend in the road in County Down in Ireland. Ward was thrown under the wheels of the car and run over. She died almost instantly from a broken neck. Ward is the first known person to have been killed in a motor vehicle accident.

In England on August 17, 1896, 44-year-old Bridget Driscoll was the first known U.K. pedestrian killed by an auto. Driscoll was crossing the grounds of the Crystal Palace on Sydenham Hill when she was struck by a motorized vehicle that was giving demonstration rides.

The driver of the car, Arthur Edsall claimed to be going 4 mph when the accident occurred, although some versions of the car could go up to 8 mph. The jury found the death to be accidental.

The accident occurred just a few weeks after Parliament had enacted a new speed limit allowing vehicles to travel up to 14 mph – an daring increase from the past limits of 2 mph in towns and 4 mph in the country.

Morale of the story: Drive (and walk) safely!