Putting Lyme Disease in the Limelight

We are well into the spring and in my region of the country the ticks seem to be more numerous this year. While most people consider those creepy crawly blood-suckers to be a nuisance, they can actually be devastatingly worse – spreading Lyme disease, a complex, chronic illness that many times is not properly diagnosed.

May is Lyme Disease Awareness Month; the perfect time to share information about this under-reported and poorly recognized disease that can disable causing arthritis, Bell’s palsy, radiculoneuropathy, meningitis, encephalitis, and in rare cases, cardiac arrest.

Lyme disease was first noticed in the U.S. in 1975 when children in Lyme, Connecticut started showing signs of what doctors’ thought was rheumatoid arthritis. Researchers identified the spiral-shaped bacteria in 1982 and realized that it was spread by the bite of the blacklegged deer tick. (Lyme disease is not transmitted from person to person.)

Symptoms flare up about a month after the initial bite and include inflammation around the tick bite that may itch, or not; the telltale bulls-eye rash is not always present. In fact, according to the U.S. Center for Disease Control, only three out of 10 people will exhibit the bulls-eye pattern. Flu-like symptoms are usually reported – headache, low-grade fever, muscle aches and fatigue.

Unfortunately, Lyme disease can mimic several other illnesses like multiple sclerosis, Parkinson’s and Alzheimer’s, so misdiagnosis often occurs. Lyme disease affects the heart, joints, nervous system and skin. If not treated, the symptoms will flair up again within the next six months. One in 10 people develop abnormalities of the heart but the majority do recover. About 10% of patients experience neurological problems. 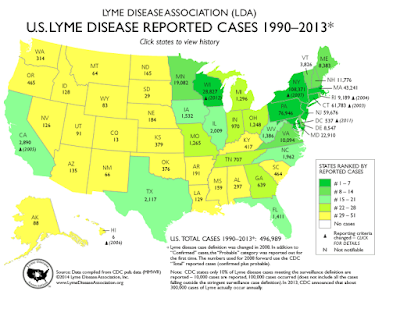 Lyme disease has been recorded in all 50 states in the U.S., but is most prevalent in the northeastern part of the country. This map indicates the number of reported cases from 1990 to 2013. 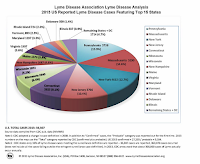 The top 15 states battling Lyme disease are shown on this 2013 diagram. Lyme disease is not just a rural problem, anywhere there is tall grass or woodsy areas; think your local park, walking trails or nature preserves, ticks can reside. Urban areas are not “safe” zones.

Lyme disease is on the rise in Canada, largely because public awareness, diagnosis and treatment have not been adequate. The first Canadian case of Lyme disease was recorded in 1977 when a southwestern Ontario girl was diagnosed with the disease, but Canadian officials have been slow to release the actual numbers of those suffering from the disease.

Lyme disease has been reported in over 80 other countries including Europe, Japan, China and Australia.

The best way to avoid getting Lyme disease is prevention.

• Wear light colored clothing so that you can see ticks
• Use an insect repellent that contains DEET
• Do a full body check after coming in from outside on yourself, your children and your pets

If you’ve been outside all day, head to the shower within two hours of coming inside and check for ticks. Something to keep in mind when you wander the cemeteries this summer.

Next Saturday night, May 23, at 10 p.m. Eastern time,  Niagara Falls will turn green for 15 minutes as a way to put Lyme Disease in the ”limelight” and help raise awareness about this illness.  http://www.niagarafallslive.com/niagara_falls_webcam.htm
~ Joy
Posted by Joy Neighbors at 5:30 AM