6 Drinking Phrases and What They Mean

Wine has been with us for centuries so it stands to reason that sayings or phrases involving wine would crop up in our vocabulary. Here are six well known drinking phrases, how they came about, and what they mean.

1) Boozing It Up
The word booze (bouse) has been around since medieval times. The term means to drink a lot of alcohol, especially whiskey or other high alcohol spirits. Some one who is said to be “boozing it up” is drinking in excess. In Australia, a drinking binge is known as a boozeroo.

2) Drunk as a Pope
This phrase is based on the conduct of Pope Clement VI who was selected to serve as Pope at the conclave of 1342. The Pope quickly became well known for his lavish lifestyle, and his inability to curb his drinking. When he died in 1352, the Pope’s reputation was of "a fine gentleman, a prince munificent to profusion, a patron of the arts and learning, but no saint."

To fall "off the wagon" means to resume drinking after having stopped. The origins of the word actually do relate to wagons – water wagons. At the turn of the 20th century, abstinence was sweeping the country and many men had “taken the pledge” (not to drink.) Instead, they said they were on the water wagon, or water cart; meaning they were drinking water not liquor. If someone began drinking again it was said that he had fallen “off the wagon.”

4) The Bitter End
This phrase usually describes reaching the limit of a person’s abilities or efforts, but it also can reference wine. For thousands of years, vino was stored in clay vessels where the sour lees (a sediment made up of dead yeast and other particles) would eventually fall from the wine to the bottom of the container. When emptying the vat, these dregs could end up being poured into a cup, and someone could find themselves drinking “the bitter end.”

5) Three Sheets to the Wind

This is actually a sailing phrase referring to the chains or ropes that control the angle of a boat’s sails. If the sheets, or ropes were loose, the boat would become unsteady or tipsy. (The actual phrase was three sheets in the wind.) To be "three sheets to the wind" indicates someone who is extremely drunk and unsteady on their feet. 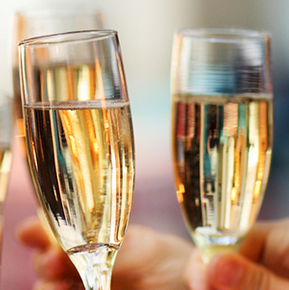 6) To Your Health
The custom of offering a toast before drinking can be traced back to ancient religious rites involving the Greeks and Romans who offered wine to their gods at feasting events. These customs evolved into today’s ritual of wishing your drinking partners a long life, or raising a glass “to your health.”

Email ThisBlogThis!Share to TwitterShare to FacebookShare to Pinterest
Labels: booze, boozing it up, drunk as a pope, off the wagon, the bitter end, three sheets to the wind, to your health, wine phrases