The Tradition of the Riderless Horse 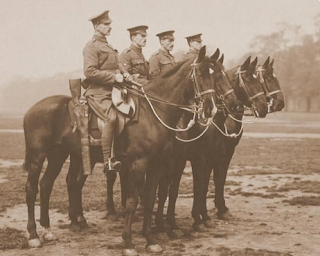 It has been said that Genghis Khan, one of the most famous conquerors in history, was the first to honor fallen warriors by having the rider’s horse led to the burial site. The bond between the soldier and his horse was expected to last the length of the animal’s life. If a warrior died before the horse, the animal was sacrificed with the belief that the master was waiting for his steed at “the gate in the sky.” 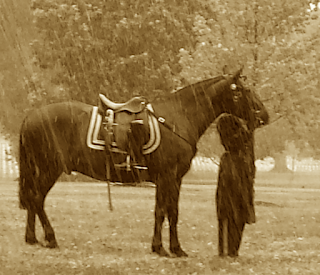 Known as a "caparisoned horse" these riderless horses have been used in funeral rites for centuries. The “Cap Horse” is led by the “Cap Walker” to the cemetery. The riderless horse is used mainly in Presidential, Secretary of Defense, and military funerals for those with the rank of Colonel or above. 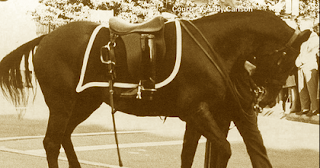 The boots of the deceased are placed backwards in the stir-ups to symbolize the rider’s one final look back before continuing on in death. 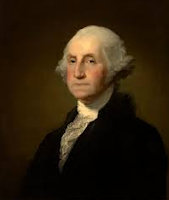 Several presidents have chosen to be honored in this way. According to White House history, George Washington’s personal secretary, Tobias Lear noted that Washington’s “horse, with his saddle, holsters and pistols (was) led by two grooms, Cyrus and Wilson” in his funeral procession. Zackery Taylor, twelfth president of the United States, had his horse, Old Whitey, lead his funeral procession. 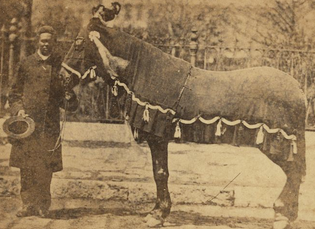 Abraham Lincoln was the first president honored with a cap horse in a state funeral. Lincoln’s horse, Old Bob, followed his master’s casket from the White House to the Capitol Rotunda where Lincoln was to lay in state. When his casket was carried to Oak Ridge Cemetery in Springfield, Illinois, again Old Bob followed behind. Both times Lincoln’s boots had been placed backwards in the horse’s stir ups. 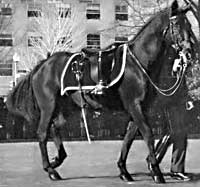 The most famous riderless horse was a Morgan-American Quarter horse named Black Jack for General John J. Pershing. Born on January 19, 1947, Black Jack was one of the last horses issued to the U.S. Army Quartermaster Corps. He arrived in Fort Myer, Virginia in late 1952 standing fifteen hands high and weighting 1,050 pounds. 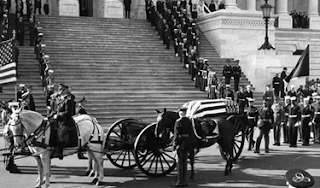 Over the next two decades, Black Jack took part in the funerals for Presidents Herbert Hoover, John F. Kennedy and Lyndon Johnson along with 5-star General Douglas MacArthur. He also accompanied more than one-thousand soldiers and retired military to their graves, mostly in ceremonies in Arlington Cemetery. 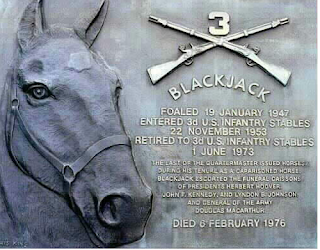 Black Jack had many fans who went to visit, sent him holiday cards and requested locks of his hair.

Black Jack died on February 6, 1976 after serving 29 years in the military. He was cremated and his remains buried at Fort Myer on Summerall Field. Black Jack is one of only two horses to have been buried with full military honors. (The other was Comanche, a survivor of the battle of Little Big Horn in 1876.) 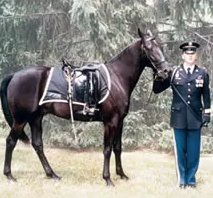 This standard bred gelding was once known as “Allaboard Jules” during his racing days. Sgt. York was accepted into the military in 1997 and renamed in honor of WWI soldier Alvin C. York.

It was Sergeant York that served as Cap Horse for the 40th president, walking behind the caisson bearing President Ronald Reagan’s casket in 2004. 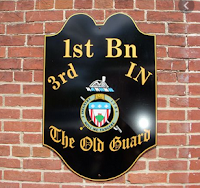 You can lean more at The Caisson Stables, which includes a small museum at Fort Myer in Virginia. There visitors can see the horses that work at Arlington Cemetery and learn more about the unique tradition of the riderless horse. Included is a tour of the stables and tack room, and afterwards you can pay your respects at the grave of Black Jack.