It’s October and that means time for the annual A Grave Interest haunting posts. Take a few moments and we'll stroll though some of the hotels that aren't normally talked about when it comes to hauntings ... and discover guests who refuse to check out.

It was 1923, during the Roaring Twenties, when The Brown Hotel was built. It was the place to be seen if you were someone in politics or society. There were sixteen floors with more than 600 guest rooms along with ball rooms, meeting rooms, restaurants and bars on the premises. 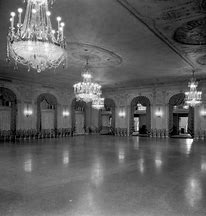 Owner  James  Graham Brown resided in the hotel on the 15th floor in the Penthouse. More than 4-million dollars was spent during the 10 month construction of the hotel, and the English Renaissance opulence was derigger with crystal chandeliers and a soaring two story lobby with a wrap around balcony, Palladian-style windows,  Bottocino limestone floors, hand-painted coffered ceilings and mahogany furniture. The  former Prime Minister of Great Britain, David Lloyd George was the hotel’s first registered guest. 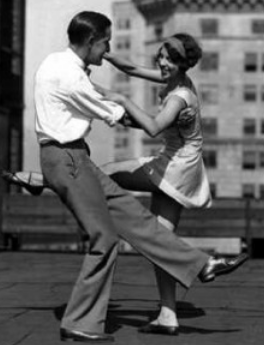 Dinner  dances were popular during the 20’s and The Brown was the place to  go with more than 1200 people attending in an evening. 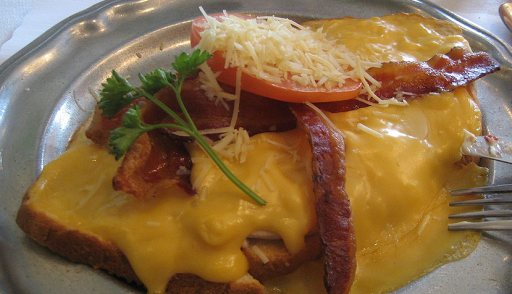 It was here in 1926 that the infamous “Hot Brown” was created by Chef Fred Schmidt. It is said that Schmidt wanted to serve something different to late night dancers so he did a riff on the traditional ham and and egg breakfast. Instead he took roast turkey and bacon served it on a piece of bread and smothered it with Mornay sauce before broiling it until the bread turned crisp and the sauce began to brown.

Then came the Great Depression and with it hard times for The Brown Hotel. 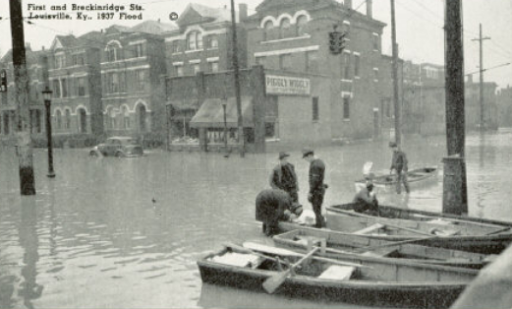 Employees worked during 1931 without wages just to keep the doors open. The Great Flood of 1937 flowed into the first floor of the hotel. But the hotel rebounded during the 1940s. With Fort Knox located south of the city, an influx of servicemen passing through stayed here on route to war assignments during WWII. 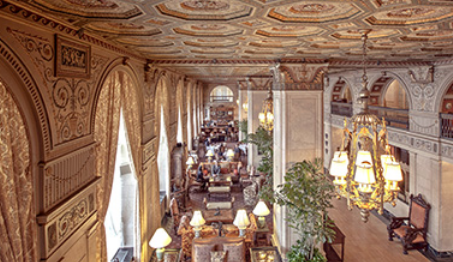 When  Brown died in 1969, the hotel began a death spiral.  It was closed in 1971 and sold to the Jefferson County Public School system as a home for its Board of Education.  Several hotel chains have owned the structure since the 1980s but in 2006, 1859 Historic Hotels purchased the building and renovated it back to its 1920s splendor.

But as with most historic hotels, this one is haunted. Rumor has it that  James 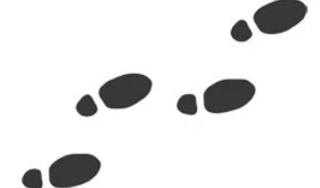 Graham  Brown decided to stay on after his death. Although the  fifteenth floor is not open to guests, employees and staff have reported seeing footprints appear in the dust on the floor while they were there. Guests occupying rooms under the penthouse on the fourteenth floor report being awakened by the sounds of heavy furniture being moved about upstairs. The elevators are known to stop randomly on the 15th floor although no one gets on or off. 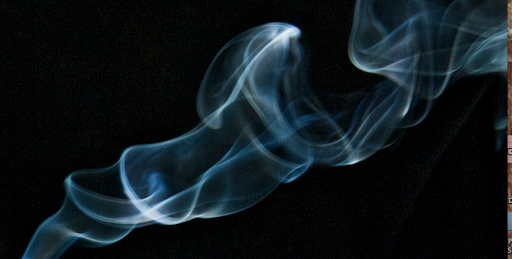 Others have reported the smell of cigar smoke lingering in the air throughout the hotel although it is designated “no smoking.” Employees have spotted Brown standing on the second floor Mezzanine watching guests. If he is approached, he steps behind a column and disappears. Cold spots are common on the Mezzanine. It's said he really “comes to life” during the weeks in April before the Kentucky Derby. 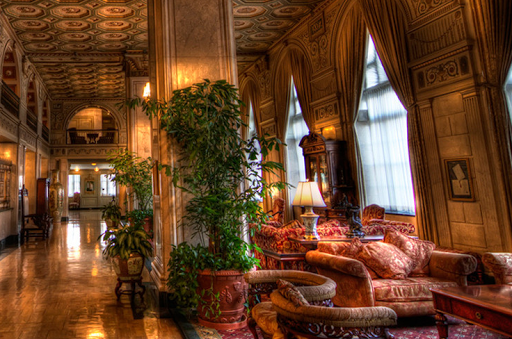 Today the hotel once again welcomes guests with the aura of a by-gone era and is known world-wide for its Southern hospitality.  For more information visit www.BrownHotel.com.

The Brown Hotel is located at the corner of Fourth and Broadway in Louisville, Kentucky.

Posted by Joy Neighbors at 11:50 AM No comments: 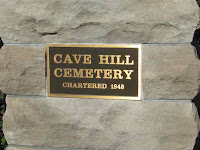 Cave Hill Cemetery was chartered in 1845 by the Kentucky General Assembly.  The cemetery was to be created from the land that belonged to the William Johnston Family called Cave Hill Farm.  The name came about because of the 246-feet cave located on the east bank of the main lake. The main interest in this land was due to the stone quarries that existed on the property.  The cemetery was dedicated on July 25, 1848 with plans for the creation of a Rural Garden-style Cemetery.

Cave Hill is comprised of 296 acres of rolling hills, with winding paths and over 400 varieties of trees and shrubs – also making it a national arboretum.   The original Victorian Rural Cemetery landscape was laid out by Edmund Lee and Benjamin Grove.  Minor changes have been made over the years, but the tranquil feel and scenic beauty still remain the focal point of the cemetery.  The main lake that runs through the cemetery is part of the Springs Branch of Beargrass Creek.  The lake divides the early western section of the cemetery from the newer eastern section. Five other spring-fed lakes are scattered throughout the cemetery where over 120,000 are buried.


Cave Hill has many captivating mausoleums on the grounds.  The cemetery also offers a hillside garden crypt known as the Ginkgo Mausoleum.  Lakeview Mausoleums is located in the Victorian section of the cemetery.  Family mausoleums are also offered.

Special Care is offered to those who own a lot and would like it planted or landscaped.  There are two types of special care; annual care and endowed or preservation care. Annual Care is available for almost all lots in the cemetery. It involves the lot holder establishing an account that pays for the annual care of flowerbeds, trees, shrubs, and other landscaping done on the lot.  Monument cleaning and holiday wreath laying may also be included.

Endowed Care or Preservation Care is where an individual may establish fund is set up to generate income during the year in order to pay for services in the following year. The interest earned on this endowment will pay the annual charge related to the services selected.

There are many famous and notable people buried here including state officials and governors.  George Rogers Clark, founder of Louisville and the person most responsible for opening the Northwest Territory to settlers is buried here, along with Colonel Harlan Sanders, the originator of KFC – Kentucky Fried Chicken. The Kentucky Giant, James Porter, is also buried in Cave Hill.  He was billed as the world's tallest man, standing l7-feet, 7-inches in the mid 1800's. There are also numerous political figures here.

Cave Hill was placed on the National Register of Historic Places in 1979.  The Cave Hill National Cemetery is located in the northwest corner of the cemetery.  The first burials, in 1861, were soldiers who died at local camps and hospitals in Louisville.

Twelve men of the 32nd Indiana Infantry Regiment, commanded by Brigadier General August Willis are also buried here. They were killed December 17, 1861 in a fight with rebels at Rowlett Station in Kentucky, the first battle Civil War in the state.  Private August Bloedner, a member of the unit, created a monument for the graves at Munfordville, Kentucky from limestone. In 2008, the National Cemetery Administration started preservation efforts to save the limestone monument.  Only about 50% of it’s original inscription and carving survive due to pollution and the elements.  Once preserved the monument will be placed at in appropriate facility for public viewing. 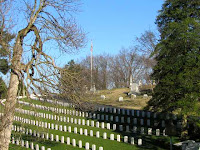 Over 5,500 soldiers are buried here, most from the Civil War.  Two hundred of those are Confederate soldiers.  A large plot exists for the remains of unknown soldiers of the Civil War.  A boulder with a plaque honoring them was put in place in 1914.  Cave Hill’s National Cemetery was placed on the National Register in 1998. 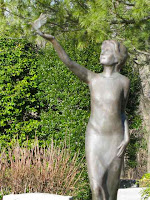 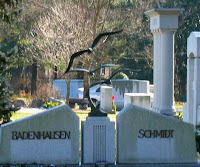 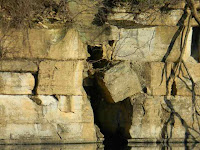 And, yes, there is a cave at Cave Hill but it is off limits due to the treacherous conditions it presents. 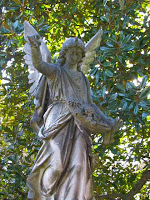 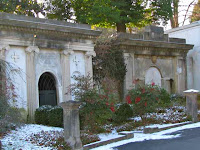 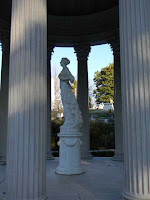 And their web site is http://cavehillcemetery.com/

Cave Hill Cemetery is worth at least an afternoon, even a weekend if you want to truly enjoy the landscape and atmosphere of this gorgeous cemetery.