Going to the Chapel…Cemetery Weddings 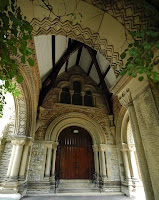 It’s June, the season of weddings.  So I decided to see what people thought of the idea of  ‘tying the knot’ in a cemetery.  It turns out this may be a trend of the future!
According to The Mortician Journal http://www.morticianjournal.com/, out of a list of ‘25 Funeral Trends for 2011’, #8 is “More and more funeral facilities will be used for other services (like weddings and birthdays.)  Funeral homes and cemeteries are now starting to utilize their chapels and grounds for ‘celebration events.’
In Indianapolis, Indiana, Flanner and Buchanan Funeral Centers http://www.flannerbuchanan.com/ built a ten-million dollar structure they call the ‘Community Life Center’ http://www.clcindy.com/  Opened in 2009, the Center was the site of ten weddings that year.  It now holds several events each month and has over 100 weddings booked for this year and into 2012.
Research indicates that more and more couples, within the past five-year, have entertained the idea of, if not actually been married in cemetery and funeral home chapels.  This interest has caught the attention of cemetery superintendents, sextons and funeral home directors, who are now viewing their sites as places to celebrate life as well as mourn the dead.
Events being held in cemeteries have included birthday celebrations, anniversary parties, seasonal musical events, historic grounds tours, proms, holiday gatherings, banquets, family reunions, business conferences and weddings.  According to a survey conducted by the National Funeral Directors Association, http://www.nfda.org/, almost 10% of over 600 funeral homes in the U.S. have or are offering an event center for use by the community.  Some funeral homes also offer their expertise in planning a wedding.  And that does make sense.  What a funeral home director can accomplish in three days for a funeral, they can also achieve for a wedding, in record time.  In this new market, wedding planners are just beginning to take consider this a viable wedding option.

The appeal of a cemetery as a wedding location is easy to understand.   According to Leigh Hensley, Executive Assistant at Spring Grove Cemetery and Arboretun http://www.springgrove.org/ in Cincinnati, Ohio, there are many reasons for couples to choose to be married in a cemetery.  For Spring Grove, it may be because of the historic nature and beauty of the grounds, or the gorgeous Norman Chapel, which is non-denominational.  And many times the location has to do with family members being interred there and the sentimental act of including those who have gone ahead.  Hensley said that Spring Grove hosts around 45 wedding per year in the Norman Chapel or their rose garden. http://www.springgrove.org/sg/weddings/sg_weddings.shtm 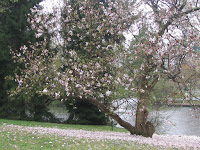 Cemeteries weddings are also considered to be more ‘green,’ or environmentally friendly, than most regular wedding and reception sites.    And, as an added bonus, the price is usually much less than traditional wedding venues. 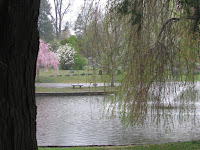 But we are not the first to be drawn to cemeteries to celebrate our life events.  In the mid-1800’s, people treated the cemetery as if it were a park, picnicking, enjoying boat rides on the lake, or taking a quiet carriage ride through the grounds.

During WW II, the Forest Lawn Cemeteries http://www.forestlawn.com/ in California buried during the day and married during the night.  Today the cemetery group has eight chapels that are used for funerals and weddings.
And the interest in cemetery weddings is not just occurring in the U.S.  Cemetery weddings have been reported this year in many parts of the world including Indonesia and China.  The main reasons given overseas for having a cemetery wedding are the same - the beauty of the location, the meaningfulness of being married near ancestors, and the lower cost.

I asked readers of A Grave Interest, friends on my personal page, and members of A Graveyard Rabbit and Cemetery Explorers, all on Facebook, if any of them had been married in a cemetery and how they felt about cemetery weddings.  The overwhelming response was very positive.  While it was a novel idea to some, almost all felt it would be a very peaceful and beautiful location for a wedding.  Here are some of the replies:


Katie Killian wrote: "I would do it in a heartbeat if there was one that I found pretty enough or interesting enough to do it in. There aren't any in Indy that I have any ties to, though."
Steve Kalland thought it was a “Great idea.”
Save A Grave stated:  “I think it’s a cool place to have a wedding.  You can find some great places that would be beautiful for a wedding.  I don’t know anyone who has done it.”
Stewart Dashwood replied: “Sounds interesting!  I like the idea but my fiancé (despite loving cemeteries) isn’t quite sold on it.”
Tricia Neal responded: “Had some pictures taken after the wedding with the old church cemetery in the background, but didn’t actually get married IN the cemetery!  (And the fact that the cemetery was in the background in the pictures was unintentional, although if I’d thought about it at the time, I would have made sure it happened that way!)
Cheryl Mason wrote: “A cemetery in Savannah…under oaks draped in Spanish moss….”
Only a few people were somewhat wary of the idea –
Allison Butt commented that she didn’t “know of anyone doing it.  I don’t think I like the idea, although the setting would be peaceful!”
Beverly Ross Nance replied: “Hmmm, no.  But my family used to picnic in them...”

Thanks to everyone who replied!  So what do you think?  Would you get married, or renew your vows in a cemetery?  I definitely would!  But then, how would you decide, between all of the beautiful cemeteries and chapel out there, which one?  Something to ponder during the next wedding you attend.
~ Joy
Posted by Joy Neighbors at 2:26 PM