Having the Last Say – Epitaphs


An epitaph is a short text, inscribed on a tombstone that honors a deceased person, provides information about them, or acts as a message to the living.  How someone is remembered can tell us a lot about who they were, their status in their family and community, and about the period of time in which they lived.

An epitaph may be a simple as someone’s name and his or her birth and death years, or the statement of a family relationship such as father or aunt.  But epitaphs can also be very detailed, or rhyming, a poem, or simply a remembrance.  Epitaphs are as distinctive and varied as the people they are a tribute to.

Epitaphs have been used for centuries beginning with symbols or signs carved into a rock and placed on the deceased’s grave. The Egyptians, Romans and Greeks all used symbols or shapes to signify who was buried in a plot.  The Greeks were said to have eight different grave forms; rectangular slabs, round columns, vases, stone blocks, receptacles for cremated remains, stone coffins, shrines, and carved stones.

A Roman epitaph of ancient gladiator Disorders, transcribed recently from the 2nd or 3rd century A.D. reads, “Here I lie victorious, Diodorus the wretched. After breaking my opponent Demetrius, I did not kill him immediately. But murderous Fate and the cunning treachery of the summa rudis killed me...”


The summa rudis, or chief stick, refers to the referee of the game.  Apparently the ref made a bad call, which cost Diodorus his life, and his family did not want this mistake to be forgotten, so it was depicted and inscribed on his tombstone.

The use of epitaphs became widespread near the end of the 1700’s in Europe and 1800's in America. During the nineteenth century they became longer and more detailed, but by the turn of this century, epitaphs began to become more concise again.

During the 1870’s and again in the early 1900’s when times were tough and money was scarce, many tombstones were made from concrete slabs.  Carved by the family, inscribed with a stick in wet cement or painted with a brush, the epitaph was still heartfelt.

An epitaph can be descriptive, religious, thought provoking, or humorous.  It all depends on the personality buried there.  Many times the deceased selected their own epitaph.  If not, then a loved one or family member might do so.  An epitaph may be an expression of grief or love.  It might indicate immigration or illness.  It can be a testament to a life well lived or a love to last forever.  It is a summation of someone’s personal story.

Epitaphs can be placed in many groups, here are just a few I've found: 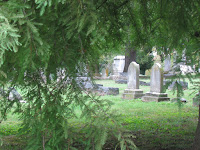 These are just some examples of the many different types of epitaphs.  So what would you choose for yours?

Posted by Joy Neighbors at 8:06 PM