On this warm and breezy October night there are about 20 of us that are ready to travel the brick streets of St Charles with Michael Henry, owner of St Charles Ghost Tours in St Charles, Missouri.

Henry, an author and paranormal investigator, intersperses history and humor into his ghostly tours. He also utilizes modern technology in the form of EMF (electromagnetic field) detectors, digital cameras, video cameras, and digital recorders in his quest for documenting the goings-on on the “other side.”

Henry’s tours last from 90 minutes to 2 hours, and are the result of stories and evidence he has corroborated. He works closely with the St Charles County Historical Society, researching the local history and tying up loose ends to legends and tales that have passed down in this river front community for well over 300 years.

The first permanent pioneer settlements here were built in the early 1700s. The original town was founded in 1765 and called Les Petites Côtes, "The Little Hills. The town of St Charles was founded here 1812.

Located just north of St Louis, St Charles has played a significant role in the westward expansion of America. It was here, in 1804, that Lewis and Clark made their final stop in “civilization” before heading out into the unknown western frontier. In 1867 about a third of the town was destroyed by a tornado. Many of the buildings had to be rebuilt, usually on the same foundation as the original.


The tour began at the City Hall building, which now houses the St Charles Historical Society. Located next door is the former home of the International Order of Odd Fellows (I.O.O.F.) The Odd Fellows began in Manchester England in the early 1700’s and crossed the ocean to America in the 1750s. This three-story brick building was built in 1870 and has been the location of several mysterious occurrences over the years. The first floor was originally used as a bank, the second story was a vaudeville theatre, and the third floor was where the Odd Fellows held their secret meetings.

It was on the second floor where the vaudeville theatre’s Green Room was located, a room that protruded out over the sidewalk. It is in this room that four “suicides” have occurred. When this was a vaudeville theatre at the turn of the century, it is said that four actors, 2 men and 2 women, each took their own life here, though the reasons are not known. But did they? At that time acting was not a noble profession, equated the same status as prostitution. So did each actor enter this room with the intention of ending his or her life?  Or was it just easier for the sheriff to call each death a suicide so that local resources weren’t “wasted” on investigating the deaths of mere actors?

Regardless, restless spirits still walk the boards, opening and closing doors, and taking the time to make sure that they latch! There are also nights, around 9 p.m., when a ghostly figure peeks out from the stage wings, checking to see how big the evening’s audience is just before the show begins - again… 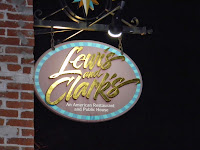 In what is now Lewis and Clark's Restaurant, a spectral couple from the 1890’s can still be seen. At one time this was their residence, a gorgeous three-story home with balconies reminiscent of New Orleans.

Today, employees who work the bar have reported that when it is very busy, they may notice a man and woman standing on the landing of the stairs leading up to the second floor. The man is dressed in clothing from another century and is sporting a handlebar moustache. The woman’s face remains unseen, but she is wearing a red dress and has long, dark hair. The two will then turn and disappear into a wall that once held a doorway. They apparently do not care much for televised sporting events. Customers and employees both report that on extremely busy nights when sports is being broadcast on the television and the crowd is cheering loudly, the TV will suddenly go off. No reason has yet been found for the occurrences.


Next we stop in front of a long, dark alley that narrowly separates a two-story building from its neighbor. Here is where Sheriff Ebenezer Curtis lived, and where it is rumored he committed suicide after assisting with two hangings where the accused may not have been guilty. Curtis managed to drag himself down the stairs from the second floor, dying just outside the entrance to the alley.


And it is here that all of the EMF meters go off loudly! Henry replies that this is usually a great place to pick up readings and orbs. He believes that the sheriff is still here, trying to repent for those final executions. When Henry shines an UV light on the alley’s brick wall, we see a glowing, dripping stain – blood, he tells us, from some past altercation that took place in this alley of darkness.

We walk farther along the darkened street and turn up a cobblestoned path that leads to a log church, and the lost graveyard. Constructed in the French vertical style, this reproduction was built in 2006 and modeled after the first church that stood here in 1791.

Dedicated to St Charles Borromeo, the church was called Borromeo Church and was located at the edge of the community’s original cemetery. The burial grounds were started here in 1750 and used until 1863 when the town decided to move the cemetery elsewhere. A total of 320 people had been buried in the 9 square block area. Most were dug up and moved to the new location, but some were left behind. There was really no effort made to move those buried in the poor section of the cemetery near the church. It is estimated that between 30 and 50 remains are still here. Over the years, some remains and tombstones have been accidently been dug up and others have been exposed due to soil erosion.

It is also here, usually in the autumn that a young woman in white can be seen standing upon the cobblestone walk, her head sadly bowed. It isn’t known who she is but Hiram Berry wrote about her and her funeral in a letter to a friend, dated September 11, 1822, just after he had left St Charles.  According to Berry, she was a 23-year-old married woman who had just had a baby a few days before. She had succumbed to illness and was buried in the best dress she owned, her white wedding dress trimmed with green lace. Berry goes on to write "She looked beautiful with her head turned to one side and a smile on her face." Berry left town a few days after her funeral and never returned. It is not known why he wrote to a friend about the woman’s death, but it has been speculated that maybe he was the baby’s father.

And what ghost tour would be complete without a spectral child? It was here that the first tavern in the Midwest, Eckert’s Tavern, was built in 1780. In fact, this spot has always housed a tavern, restaurant or bar. In 1949, the tavern located here burned down, but in that fire a 9-yeer-old girl died of smoke inhalation by the front door. It is not known why she was there – she actually lived just a few doors down.


Customers and employees report that the child is still here, and on this night, maybe she is. EMF meters went off in this location. Henry seemed surprised, saying that this was a rare occurrence that happens only two or three times a year. The little girl has been known to tug on a person’s sleeve to get their attention and to swipe food from customers’ plates, but tonight she only set EMF detectors buzzing. But more than a few of us cast glances behind as we moved on down the street.

There are an abundance of ghosts in St Charles, and Henry is a wealth of paranormal and historical information. Tours are given year round on Friday and Saturday night at 7 p.m., 9:30 p.m., and if you’re lucky, sometimes at midnight. Tours are suitable for adults and children over 14. Wear comfortable walking shoes and remember, tours go – regardless of the weather.

For reservations phone (314) 374-6102 or visit the web page at http://www.stcharlesghosts.com Tours begin at the corner of Jefferson and South Main Streets.

I have lots of spectral things coming up next week. On Monday, I’ll be a guest on The Shadows Radio http://theshadowsradio.com, talking about the different ghost tours I’ve covered, and spirits I’ve encountered in cemeteries. Show starts at 9 p.m. Eastern time.

Join me next Wednesday on Joy’s JOY of Wine http://joysjoyofwine.blogspot.com for a look at a haunted winery located in the rolling hills of Missouri.

And next Friday, we’ll take a walk on the spooky side of Westfield, Indiana where I photographed "snow" on a balmy September night...